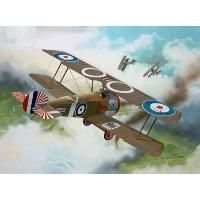 Thanks to a broken leg during flight school, Arthur Stanley Gould Lee gained valuable additional time flying trainers before he was posted to France during World War I. In November 1917, during low level bombing and strafing attacks, he was shot down three times by ground fire. He spent eight months at the front and accumulated 222 hours of flight time in Sopwith Pups and Camels during a staggering 118 patrols - being engaged in combat 56 times. He lived to retire from the RAF as an air vice-marshal in 1946. Author of three books, this is by far his best. Lee puts you in the cockpit in a riveting account of life as a fighter pilot at the front. At times humorous and dramatic, this thoughtful, enlightening, true account is a classic to be ranked with Winged Victory by W. V. Yeates, also published by Grub Street. 1. Language: English. Narrator: Roger Davis. Audio sample: http://samples.audible.de/bk/acx0/044364/bk_acx0_044364_sample.mp3. Digital audiobook in aax.

High Quality Content by WIKIPEDIA articles! No. 46 Squadron of the Royal Flying Corps and the Royal Air Force, formed in 1916, was disbanded and re-formed three times before its last disbandment in 1975. It served in both World War I and World War II. No. 46 Squadron was formed at the RAF Wyton base on 19 April 1916 from a nucleus trained in the No. 2 Reserve Squadron, it moved to France in October of that year equipped with Nieuport two-seater aircraft. The squadron in Arras, France, 1917. The squadron undertook artillery co-operation, photography, and reconnaissance operations until May 1917, when it took on a more offensive role after rearming with the Sopwith Pup. The change from a corps to a fighter squadron came at a moment when Allied air superiority was being seriously challenged by Germany, in particular through the introduction of the "circuses" formed and led by Manfred von Richthofen.

High Quality Content by WIKIPEDIA articles! No. 23 Squadron was a squadron of the Royal Air Force. Until October 2009, it operated the Boeing Sentry AEW1 Airborne Warning And Control System (AWACS) aircraft from RAF Waddington, Lincolnshire. No. 23 Squadron of the Royal Flying Corps was formed at Fort Grange, Gosport on 1 September 1915. The squadron moved to France in 1916 flying FE2bs. The squadron used the FE2b on escort duties but later in 1917 converted to Spad S.VII and Spad S.XIII single-seaters. The squadron converted to Sopwith Dolphins in 1918 until it disbanded just after the war on 31 December 1919.

High Quality Content by WIKIPEDIA articles! No. 61 Squadron is a squadron of the Royal Air Force. It was first formed as a squadron of the British Royal Flying Corps during the First World War. It was reformed in 1937 as a bomber squadron of the Royal Air Force and served in the Second World War. No. 61 Squadron was formed at Rochford, Essex, on 2 August 1917, as one of the first three single-seater fighter squadrons of the London Air Defence Area intended to counter the daylight air raids. It was equipped with the Sopwith Pup.

High Quality Content by WIKIPEDIA articles! No. 213 Squadron was a squadron of the Royal Air Force. The squadron was formed on 1 April 1918 from No. 13 (Naval) Squadron of the Royal Naval Air Service. This RNAS squadron was itself formed on 15 January 1918 from the Seaplane Defence Flight which, since its creation in June 1917, had had the task of defending the seaplanes which flew out of Dunkirk. During World War I 213 Squadron flew Sopwith Baby floatplanes and transitioned to Sopwith Camels. It was during this time that the squadron derived its Hornet insignia and motto for the squadron badge, after overhearing a Belgian General refer to the squadron's defence of his trenches, "Like angry hornets attacking the enemy aircraft".